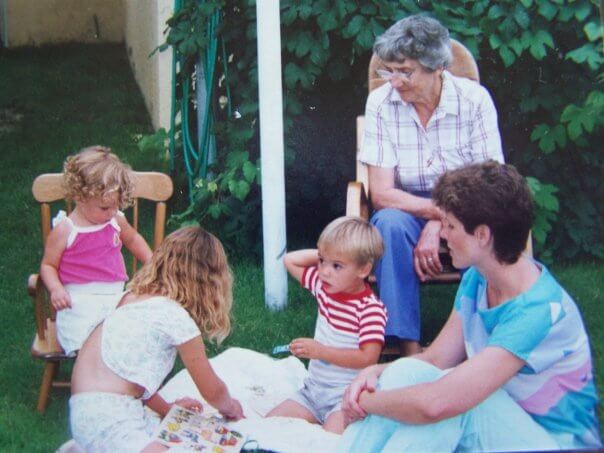 I was born on March 2, 1984 in a small town called Hobbs, New Mexico. My family lived in Lovington, population 9,000, about 15 miles away. This was and still is oil country. You won’t find much else here besides oil trucks, oil services, and oil companies. To most this is barren wasteland, but to me it was heaven on earth.

I passed the years before school running around barefoot, shirtless, and playing GI Joes. One of my favorite things to do was build GI Joes “bases” in the sandbox in our backyard. Oh those were the good ol’ days.

My family lived on Aspen street. A short street that contained a ton of my future friends. Friends that I have to this day. Joel Lowry, Lindsey Huff, Luis Aranda, Cory Escobedo, Demetria Salmon, Cheeto Hernandez and a couple others have remained a part of my life in various forms 33 years later. 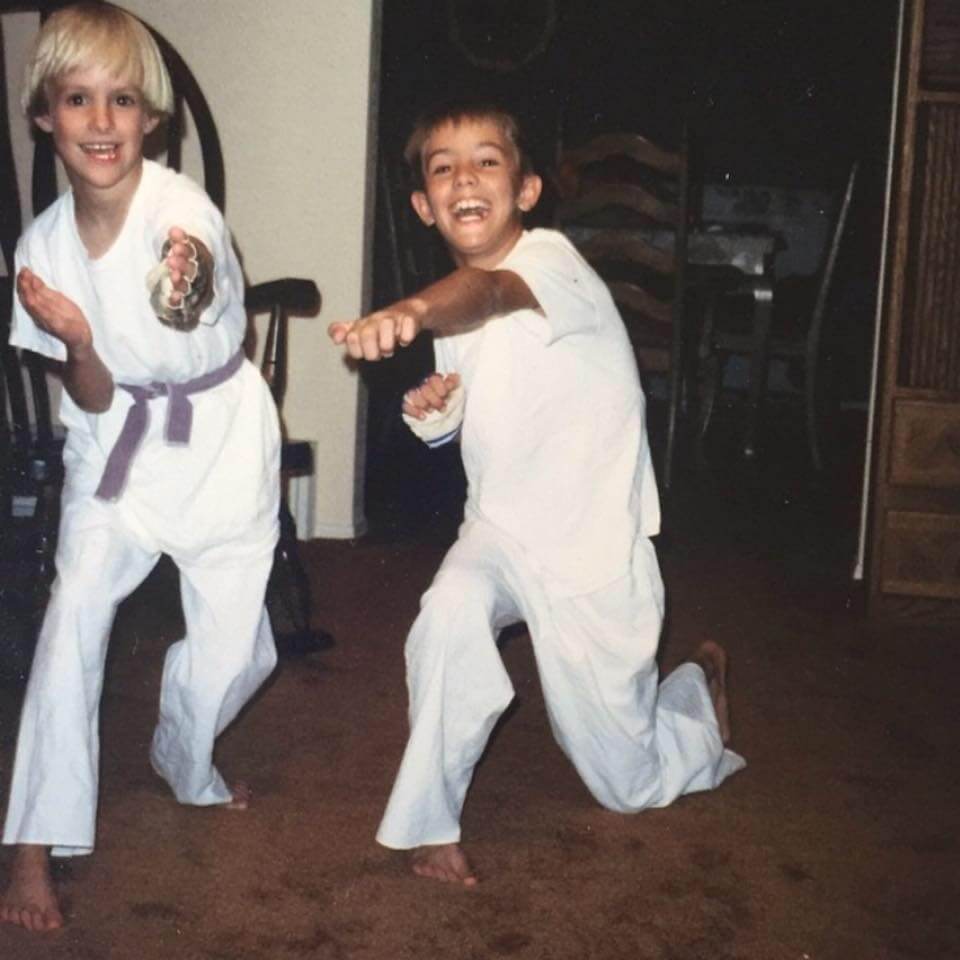 School started and I was off. I got into fights and general trouble. In second grade the entire school held a foot race – which I won by a considerable margin. Ever since that day I knew I was one of the fastest folk’s in the state! And keep in mind – I earmarked my early life according the grades of school. But make no mistake – school was at the bottom of my priority list.

Life was fun and things were peachy. My family spent most weekends in Lubbock, Texas browsing through antique stores and wasting time. This was the age before the internet. If you wanted to learn about something like how to do magic tricks, you had to read a book. Reading became my favorite pastime. I read books on magic tricks, every Hardy Boy’s mystery novel, books on construction, books about spies, books about sports, and every book that ever caught my fancy. Reading became my first love.

Fourth grade came around and some teachers wanted to test me for “gifted” classes.  You know classes where smart people are channeled. However, I didn’t quite make the cut. I missed a super easy question dealing with subtracting quarters. Oh well.

During this time, I also found the time to learn Spanish. Cuss words and jokes caught my fancy and so I began to ask some Mexican classmates how to say certain things. They never saw a white person act like this so they took a special interest in me and taught me everything they knew. And let me say – they taught me every bad joke and cuss word under the sun! My teachers also hadn’t seen anything like this before – they were not happy.

Fifth through Seventh grade consisted of the guys favorite and racist pastime – Mexicans against White’s tackle football (which is funny considering that I had/have a ton of Latino friends). No helmets, no pads, full contact, concussion football. There were fights, there were concussions, there were more fights, and for some still unknown reason, we played this game every single day. I once saw a guy break his two front teeth in the top of another guy’s head. A bloody mess it was.

During this time, my family moved from Aspen street out into the countryside on Gum street. The home was bigger and came with about 5 acres of land. This extra land led to all kinds of interesting things.

My dad developed a phobia of crows. Crows would land in our pastures, eat grain with their crow friends, and fly up into our pecan trees and eat the pecans. Boy oh boy, did my father not like this! He developed some techniques to combat them. One day I walked into the house and saw my dad in his underwear squatted in his bathroom, with a rifle sticking out a small little crack in the window, trying to shoot the crows out of the tree. Other days I’d come home and see him outside running with a shotgun attempting to assassinate the darn crows out of midair. Still other days he’d be driving down the street in front of our home, notice some crows sitting in the pasture and proceed to pull the truck off the road and open and slam the car door shut in a weak attempt to scare them off. 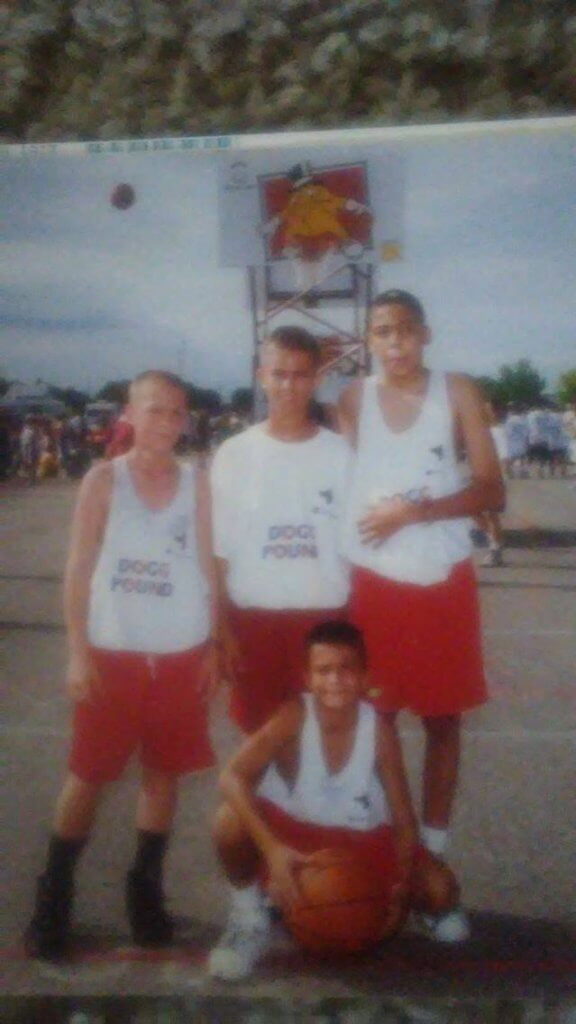 Sixth and Seventh grade saw me make all A’s in all of my classes. This was merely an experiment for myself: try my hardest, study and make all A’s. I did it easily. Seventh grade also saw the introduction of full contact football with pads. In our very first game, the first time I touched the ball, I ran 70 yards for a touchdown. I think I was onto something.

Junior high – my mom was the secretary here. She routinely witnessed her son receive numerous swats/spankings/etc from the principal for things ranging from forming “kidney shot” gangs, exploding water spigots in science class, to hitting a home run and knocking a girl out with the ball.  In physical education class, we also got banned from playing football for the entire year because we kept yelling “encrotchment on the defense”!

Junior high also had a very cool math teacher who was color blind and had a hook for an arm. One of his favorite games was to pinch students with the hook. We quickly learned that Stroh couldn’t close the hook if we grabbed the main wire tendon that ran down the underside of his arm!

A ROGUE IS BORN 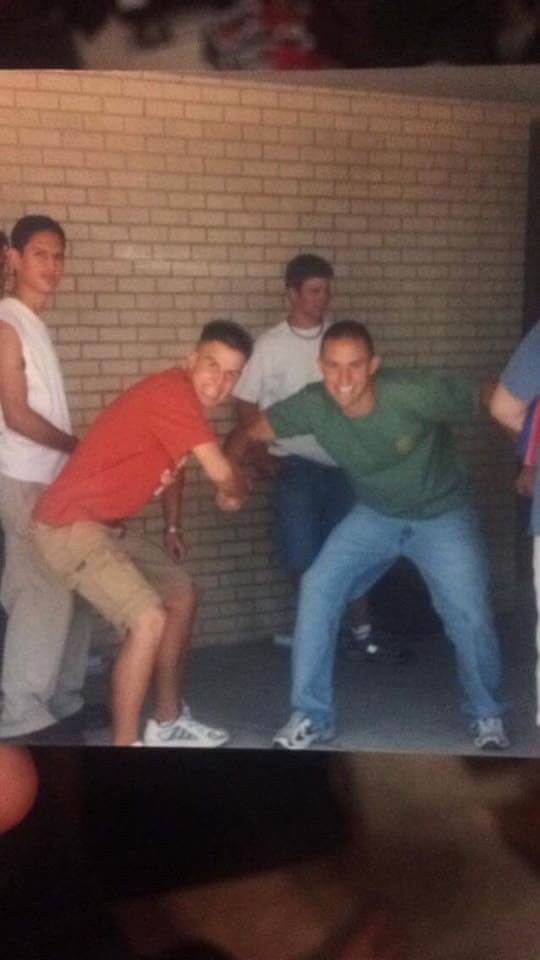 We won two AAA football state championships my junior and senior year (undefeated senior year). I ran track my junior year and was the second fastest in the state in the 100 and 200 meter dashes. And this is where I am going to end with sports. Up to this point in my life, sports played a very big part in my life. But as I would shortly find out – the world offered so much more than running fast and scoring touchdowns.

My first vehicle was a Nissan truck. It was OK but nothing special, save for the fact that the water spigots whose job was to spray water on the front window to help clean it were moveable. Moveable in the sense that I could rotate them to the side and at angles to where the water spigots would shoot people standing next to my truck or even in front of my truck. The water quickly got changed for tobacco spit and piss and more and more people found themselves soaking in this mystery liquid.

A life changing moment occurred junior year for myself and my entire group of friends. Again, this was still early internet days and teenage guys still weren’t sitting in front of an X-Box all day wasting time. No, no, no – my group of buddies had bigger and better designs. Caden, one of my best friends lived out in the country on several acres of land with about 500 chickens, some for fighting and others for eggs. Anyhow on his land there was a decent sized, thrown together shed. To the layman, it looked like trash – but to us, this shed presented the opportunity of a lifetime!

One day we decided to transform this thrown together shed into a clubhouse or Fort as we called it. We proceeded to work every day after school and all day on the weekends, transforming the shed into a two-story Fort, complete with big screen TV, full sized bar, several couches on the bottom floor, and 6 beds on the top floor. We also had a full sized cooker complete with smoke stack. “In heaven” doesn’t even describe the places the Fort took us. To teenagers with big imaginations, the Fort took us to heaven and back daily. But we were just getting started.

The Fort provided us a place to sit around, hangout, and shoot the breeze with each other. It was such a unique and unheard of concept, people didn’t know how to react when they asked what we did over the weekend and our response was “we hung out at our Fort.” Normal people just don’t talk like that.

Some of the accomplishments of the years including having huge firework wars every Fourth of July (junior and senior years). Even here you can begin to catch glimpses of our ingenuity. We had two “favorite” weapon’s we used in the firework wars: (1) roman candles held sideways, and (2) artillery shells with either throwing the artillery shell with a cut fuse or shooting the artillery shell sideways from the launcher! And a firework war wouldn’t be complete without shooting someone – which we definitely did. One unfortunate soul, Cody Luce, found himself standing on top of a small sand hill behind the Fort during a war. For some reason or another about ten people or so (even the guys on his team) decided to turn against him. The result included at least 10 artillery shells plus that many roman candles being shot at him. He got hit several times and was very pissed off. Another war saw another friend, Uncle Bux, get shot in the back. A patch of hair has grown there ever since.

Another “famous” accomplishment was “Fort Stock.” Fort Stock was simply a play on Woodstock – or a big concert/party.  The idea was to outfit the Fort with everything needed to host a huge party for everyone in high school. We knew some guys who played the guitar and had a band, they were in. The remainder of the setup included (and I don’t know why) throwing tires all over the roof, fireworks (of course), and food. The party itself consisting of the entire school blasting plenty of fireworks, the band playing out of control, and the fire department. Evidently it was against the law for me to burn tires.

The remainder of my junior and senior year consisted of taking multiple white water rafting trips (we were only notified afterward that life jackets were required by law), fishing trips, trips to jump off railroad bridges and tall rocks, hunting, and general mayhem.

And then one day we invented something that changed the city forever – the Master Hecklers.

The Master Hecklers is just what it sounds like – a group of rowdy dudes who only played football, going to high school basketball games, and talking trash. Talking trash consisted of some interesting things – a wooden witch craft stick from Africa, which we would gather around and each put a hand on it, proceed to cock it (like a pump shotgun), and finally shoot whoever was shooting a free-throw and/or the ball, riding into the games on scooters while squatting as low to the ground as we could, dancing at half-time, insane half-time speeches given in the bathroom (we’d give out awards to guys who were impressive), “Heckler Christmas” consisting of throwing a tumbleweed in a boot and handing out trinkets to the crowd, and finally starting fights with entire campuses. Imagine 15 versus 200. That’s what I’m talking about.