[stag_dropcap font_size=”50px” style=”squared”]I[/stag_dropcap]n order to understand the following analysis an open mind is required (at the very minimum). If you watch the news regularly, read the Wall Street journal everyday, or think climbing the corporate ladder is the best of all scenarios, chances are you won’t get what I’m about to say. You won’t get it because you exhibit the characteristics shared by mediocrity.

First off, the question is wrong because it assumes the polls were “innocently” wrong rather than manipulated. The question is akin to asking someone “hey, when did you stop beating your wife”? Either way you answer, you’re wrong.

In the days leading up to the election and even prior, during the debates, I routinely saw pundits on the various television channels making statements and tweeting statements like “Latinos don’t vote for Trump” or “Latinos won’t vote for Trump”. Folks, it doesn’t get any more blatant and in your face than that. This is manipulation in its purest form – telling people who largely believe the stories they see on TV (Judge Judy, Casa Cerrado, Infomercials, Maury, and Soap Operas) who to vote for.

Take CBS News for example. I watched each debate on CBS and tweets were constantly posted to the bottom of the screen throughout each. The interesting thing is that every tweet was against Trump, directed at blacks, latinos, and women. Pretty biased eh?

Another good question is this – Why are latinos, black, and women constantly singled out? Could it be that their minds are prone to being influenced by what famous people say or recommend or believe most of what they see on TV? The answer to this question brings you yet a step closer to reality. I am speaking in absolutes, something that is rare these days where every statement a person makes gets broken down by others. For example, if I say “that car is blue”, someone will come in and say “no it’s not really that blue, but it kind of has some green in it too”. Breaking everything into various shades is a quick way to understanding jack shit. Sometimes one must talk in certain terms.

Let me give you some food for thought? Do you believe everything you see on TV? Or asked another way, does the media lie? Back to the analysis.

During the days leading up to the election, the polls that came out routinely showed Hillary Clinton in the lead. In reality however, Trump was in the lead. Trump routinely broadcast his speeches and talks on Facebook live where he’d draw audiences of around 200k people. Hillary did the same and her audiences were typically around 9k people. But yet somehow, the polls continued to show Hillary in the lead. Doesn’t make very much sense right?

In addition to this on Monday Trump gave three speeches in three states, each of which was broadcast on live TV. In each speech Trump told the media cameras to turn the camera around and show the audience. He requested this because he had tens of thousands of people in the audience and also because it would make it harder for the media to continue to lie about the polls with this type of visual proof. Alas, the media did not comply with his requests and the crowds were not seen by folks at home.

Contrast this with Clinton’s speeches held the same day. The media showed the crowds. Since folks at home had nothing to compare her crowds to, the crowds for all purposes seemed large.

By the time election Tuesday rolled around, it was becoming harder and harder for the media to suppress the truth. Their comments which once were exclaiming “Clinton is far ahead of Trump” or “Clinton has a 95% chance of winning” were ever so subtly changing to “it’s a white knuckle race” and so on and so forth.

The analysis here is this – Trump was ahead of Clinton going into the election but the media was covering it up saying that Hillary was ahead. This was easy to do because of the fluid nature of everything (polls, participants, etc). Fast forward to election day and the pundit talk became “it’s a white knuckle race”. So if Trump was winning when the pundits were saying Hillary was ahead, imagine how bad he must have been winning when the pundits began stating “it’s a white knuckle race”.

Finally, I want to put all of this into perspective and put the nail in the coffin so to speak. I want to talk about Wikileaks. If you haven’t read any of the emails, then I highly recommend it. For once you do, you’ll learn things you’ll never be able to forget. 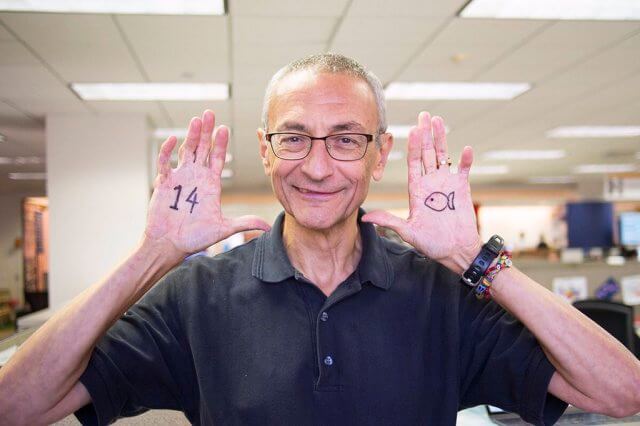 I’ll start with Podesta. In reading through the Wikileaks emails, one thing becomes clear – this guy is a devil worshipper/satanist/occultist and likely a child trafficker. With that being said, the question becomes, why is he a child trafficker? For two reasons – to have sex with children and to sacrifice children in the crazy ass satanic rituals this guy participates in. This is strong language but it’s all easily backed up with Wikileaks. You can read the emails here. Note – spirit cooking is just another name for a satanic ritual. Another note – Podesta’s brother Tony is one of Washington DC’s top lobbyists (meaning companies pay him millions of dollars to try and influence politicians).

And best of all – Clinton participated in these occultist events.

Why does this matter? We have these elite people at the very top 1% of our country, living without any rules whatsoever. Want to have sex with children? Sure go ahead, you won’t get in trouble. In fact, we can traffic them! They worship the devil and perform and participate in all kinds of satanic practices. These people, secretly worship the devil and sacrifice various things (likely children), while publicly claiming they are religious and believe in God etc etc. They are at the top, living without any rules whatsoever while trying their damndest to make all of the masses caged inside networks upon networks of rules, regulations, religious rules, and so on. They want to live without rules but want us to be caged by them.

In closing, maybe you don’t agree with everything I’ve said – that’s fine. Nothing is black and white except the Wikileaks emails. Instead of accepting the media’s commentary on the Wikileaks emails as true , do yourself a favor and read them for yourself so you can make your own mind up about what the truth is. That is, do it if you care enough for the truth. If you don’t ,then you have no right to complain about the way things are.

And if you don’t think the media was misleading the masses as to the polls, then that’s all to say that you believe what’s on TV.

436 thoughts on “With all the technology available why were the polls wrong or when did you stop beating your wife?”