If we are in fact living in a virtual reality type environment, this necessarily means our world (virtual reality/matrix) was created by already existing, super-intelligent artificial intelligence.

Now I’m going to tell you some things you probably don’t know. First off, I hope you’ve seen the Matrix. Even if you have seen it, chances are they you haven’t quite fully grasped the underlying themes.

In the Matrix (the movie), the Architect (powerful artificial intelligence) has designed the Matrix. So you have the machines and humans all living in the Matrix. But there is a certain subset of humans that pose an interesting problem for the Architect. There are some humans who are skeptics and have an intuitive gut feeling that something isn’t right with the world they are living in (Musk fits here).  It’s these people that pose a danger to the Architect because with enough numbers and cunning they could threaten the Architect’s existence. These people are the one’s who refuse to take people’s word for things, instead choosing to remain skeptical about anything and everything.

The Architect being the sentient, all intelligent, artificial intelligence machine that he is, devises a cunning strategy. He will create a Matrix inside the Matrix called Zion. It is here (Zion) that he will channel all of the skeptical, trouble-making humans. The results are extraordinary. When the skeptical humans enter Zion, they (1) feel like they’ve escaped the Matrix, and (2) stop being skeptical. On top of all this, if these once skeptical humans ever get a gut feeling about something not being right, they’ll simply chalk this gut feeling up to being true reality. 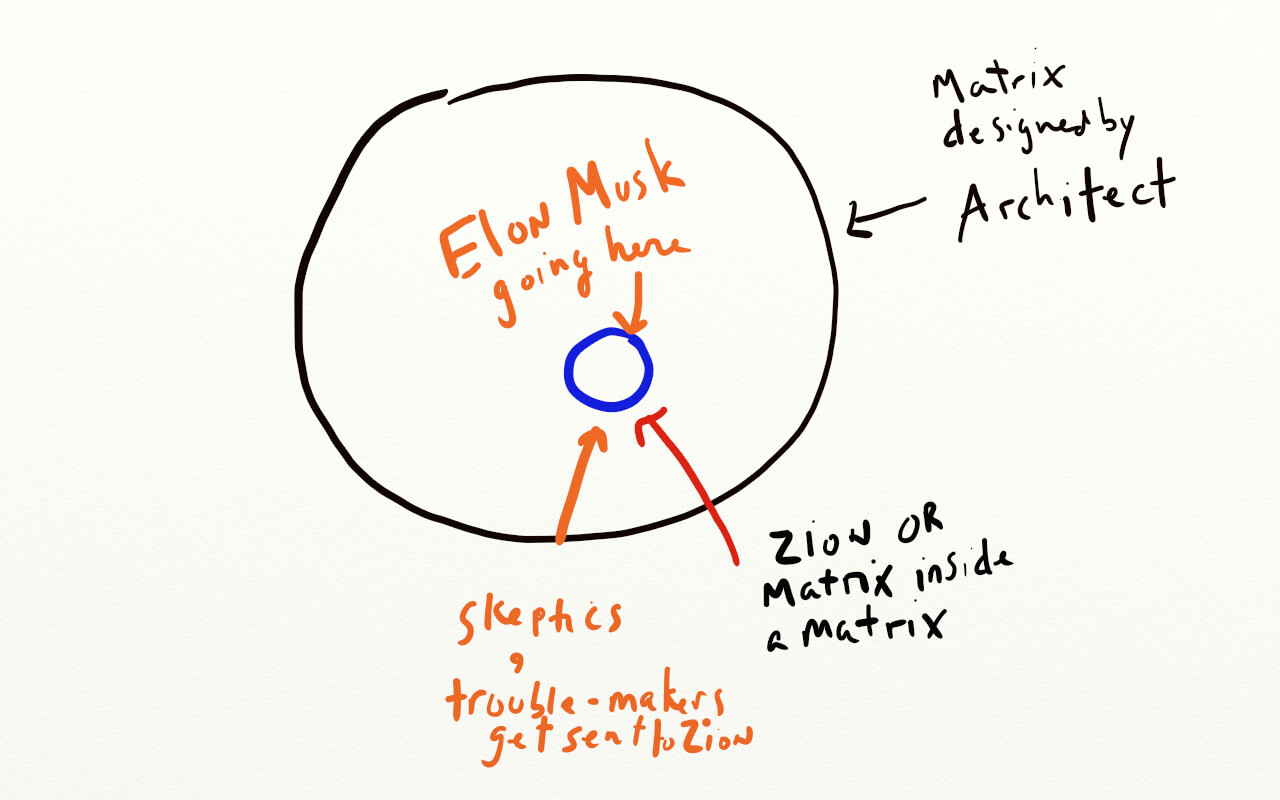 And so it is with Elon Musk. If he’s correct and we are truly are living in virtual reality, then chances are he’s headed straight for a location just like Zion. Once he enters whatever location this is, he’ll cease being a skeptic, thinking that he’s now truly living in reality. But we know better than to believe that.

In sum, if we are living in virtual reality, then the artificial intelligence that created this world will have already made plans on how to deal with trouble-making, skeptical humans (like Musk and myself included).  And chances are this looks a lot like how the Architect dealt with the issue in the Matrix.

42 thoughts on “Elon Musk, virtual reality, and why he’s headed straight to Zion”